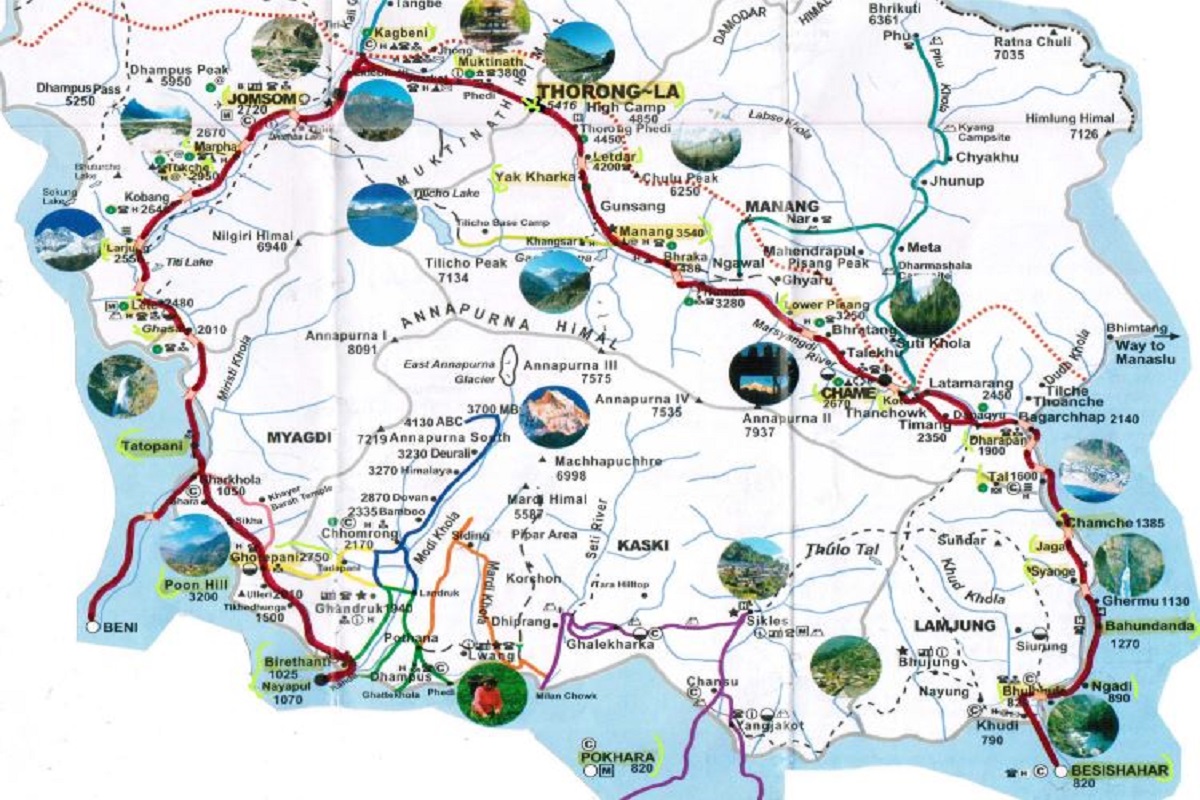 Annapurna Circuit Trek itinerary is one of the longest trails in the famed Annapurna region. Also called Annapurna Round trek, Annapurna Circuit trek takes you to the trans Himalayan area of Manang and Mustang valleys. Once part of the expansive Tibetan kingdom, Annapurna circuit trek itinerary passes through an area heavily influenced by Tibetan culture and tradition. Meet the Manangis people who are known for their horse riding and Thakali people of Jomsom and Kagbeni who are extremely skilled in trade and preparing delicious cuisine.

On Annapurna Circuit trek itinerary you will cross Thorang La pass at the elevation of 5416m. The second part of the journey is down Kali Gandaki river on the bank of which lies Muktinath or Chumig Gyatsa. Muktinath is one of the most sacred Buddhist and Hindu temple featuring the statue of Padmasambhava, eternal flame and 108 water spouts. A large part of the trekking trail covers Annapurna Conservation area which is a role model for eco tourism.

Thorang La is one of the highest Himalayan passes in Nepal. The pass can be approached clockwise or anti-clockwise direction. The easier and safer route is anti clockwise which begins from Thorang Phedi and drops down to Muktinath. The reverse route is not impossible but it is not recommended due to heavy ice trail near Muktinath early in the morning. If you approach the pass from Thorang Phedi, you will reach Thorang La before 12pm and as you prepare to trek down to Muktinath, the ice already starts to thaw making it easier and safer for trekkers to reach Muktinath.

Annapurna Circuit Trek begins from Besi Sahar and passes through Bulbule, Syange, Chame, Manang, Thorang La, Muktinath, Jomsom, Marpha, Tatopani and exits out of Beni. It used to be around three long weeks of trek but nowadays because of road construction, the trail has become shorter. Most of the scenic parts of the trail can now be covered on a drive. Annapurna Circuit Trek is surprisingly becoming even more popular due to its shorter duration. Lonely Planet and other guidebooks have repeatedly put Annapurna Circuit Trek as one of the best trekking destinations in the world.

Scroll below for the latest updated Annapurna Circuit Trek itinerary.