Things to know about Manaslu Circuit Trek. Manaslu Circuit trek involves making a complete circle of Manaslu Himalayan ranges, which is the eighth highest mountain in the world. Along with the trail you will have great views of Manaslu, Annauprna,  Himlung Himal, Gyaji Kang and Kang Guru.

Because this is a challenging trek that requires you to go into the higher elevation and even cross Larky La Pass at 5167 meters, very few trekkers go choose Manaslu trek. The Manaslu Circuit trek takes you to  Nubri and Tsum valley where people follow Tibetan culture and dialects and visit medieval Shringi, Rachen and Mu Gompas. Also Manaslu Larke pass trek is a controlled area where trekkers have to pay extra permit fees to enter the area. The trekking region lies within Manaslu Conservation Area which is rich in flora and fauna such as Himalayan Musk Deer, Red Panda and Snow Leopard.

Mt. Manaslu at 8156m tall is the eighth highest mountain the world. The Manaslu Himalayan range lies in Gorkha district of Nepal inside Manaslu Conservation Area. And has several trekking routes in Manaslu region.

Manaslu Mountain located 63km east of Annapurna region is the eighth highest mountain on earth. Also called mountain of spirit, Mt. Manaslu was first climbed in 1956 by a Japanese expedition. Since then over 300 mountaineer have climbed the mountain.

Manaslu Conservation Area has recorded 11 types of forests that is home to 2,000 species of plants, 39 mammals, 201 birds, 3 reptiles and 11 butterflies. Some of the rare animals found in the area like Snow Leopard, Musk Deer, Brown Bear, Himalayan Thar. The conservation project in support of local community has been promoting eco tourism in the region.

Manaslu Base camp is situated at an altitude of 5200m. It is about 4-5 hrs steep walk from Samagaon to reach Manaslu Base Camp. As soon as you reach to the base camp you can see the spectacular Manaslu glacier and Mansalu ranges.

Manaslu Trek itinerary takes you to all the best spots of Manaslu region including Manaslu Base camp. You will also visit Mu and Rachen Gompa and trek to Tsum Valley. The highest point of this trek is Larkey La at the altitude of 5167m.

Manaslu Trek difficulty is usually graded as moderate to strenuous. The trek is an adventurous trekking that takes you to high passes and valleys while making a complete circle of Mt. Manaslu. The trails are challenging and require acclimatization.

You can easily find Manaslu trek map in map shops and stores in all tourist destinations in Nepal. A Manaslu map will help you to get information and navigate Manaslu region. It costs anywhere between US$2-5 per copy.

Manaslu trek best season is either during Spring (Mar-May) or Autumn (Sep-Nov). During these seasons the weather is fine, the visibility is clear to see snowcapped peaks and the forests come alive with flowers and wildlife activity.

Manaslu trek weather entirely depends on the season you chose to trek. Manaslu trek is best in Spring (Mar-May) and Autumn (Sep-Nov) when the weather is mild sunny. The higher valleys in Manasu region has alpine climate as compared to temperate ones in lower region.

Manaslu trek in August is probably the best time of the year. August signals the beginning of the Autumn season and promise for a warm and balmy weather ahead. Skies are clear and blue and the Himalayan peaks glisten in full sight.

Manaslu trek in December is possible but not recommended. It is the height of the winter season when Manaslu region is much snow. The visibility is too poor and the temperature will go below zero in higher region of Manaslu.

Cheap Manaslu Trek is one of the options we have for those trekkers who are travelling on tight budget. This trek includes transportation, food and accommodation along with a guide. Cheap Manaslu trek is best approached during Spring, Autumn and even during Summer season.

Manaslu trek without guide is not recommended and is highly risky. It is a high adventure trek in to the Himalayas which involves crossing passes and going to higher altitudes. In this case an experienced guide with local knowledge is a must necessary to do Manaslu trek.

Manaslu trek accommodation comes in two types: basic lodges or homestay. Lodges are available all along the trek while homestay has recently been opened in few places in lower region of Manaslu. The trek accommodation is of basic standards with some offering hot shower.

Manaslu trek road building has been going for a few years. The roads being built however do not obstruct the Manaslu trek whatsoever. Manaslu trek is one of those pristine areas that is full of natural and cultural diversity. So for, Road access has been connected till Soti Khola.s

Manaslu Base camp trek is one of the several trekking trails in Manaslu region. Similarly, the purpose of Manaslu Base Camp trek is to take you to Manalsu Base Camp which is located at an altitude of ,,,,,m. Best approached during Spring and Autumn.

Manaslu Basecamp trek itinerary takes you to the base camp of Mt. Manaslu, the eighth highest mountain in the world. Moreover, it is an adventurous trek that involves crossing high Himalayan passes, walking through glaciers and snows and dense forest. In addition you will also learn about Tibetan culture and lifestyle and visit Rachen and Mu Gombas.

Manaslu larke pass trekking is the most adventurous and longest trekking route in Manaslu region. In addition this trek you will cross Larke pass lying at an altitude of 5167m and see spectacular Manaslu range. Other attractions include visit to Tsum Valley and Mu and Rachen Gompa.

The highest point you will reach in Maanaslu Larke pass trek is the Larke pass located at an altitude of 5167m. Thus trekking trail mostly passes through Manaslu Conservation Area which is home to many rare animals. Enjoy spectacular views of Manaslu ranges, world’s eighth highest peak.

Larek pass trekking is one of the finest trekking routes in Manaslu region. Located in Gorkha district, Larke lass trekking takes you to Larke Pass (5167m) to enjoy majestic views of Manaslu Hiamalyan range. You will also visit the medieval monasteries RAchen and Mu Gompa and learn about Tibetan culture in Tsum and Nupri valley.

Manaslu Trekking is one of the most adventurous and exciting Himalayna trek. In this trek you will visit Manaslu Base Camp as well as cross Larke La pass. However the best part is to visit Tsum Valley along with Mu and Rachen Gompa.

Manaslu Annapurna trek is a combination of two famous Himalayan trekking, Manaslu which is the eight highest and Annapurna which is the ninth highest mountains in the world. This trek involves crossing highest passes, trekking through two conservation areas and visiting ancient palaces and medieval Buddhist shrines such as Chumig Gyatsa and Rachen Gompa. 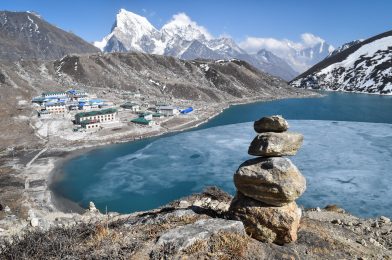 Gokyo lakes trek from Kathmandu is undoubtedly the most adventurous trekking route in the famed Everest region. The trek offers you a unique opportunity to visit Gokyo Lakes in Everest region which almost reach the altitude of 5000m.

Moreover, Gokyo Lakes is world’s highest freshwater that is glacier fed and appear deep turquoise in color. There are five lakes in Gokyo Valley which are located at a considerable distance from each other. Similarly, the Gokyo Valley trek follows these Gokyo Lakes that lies side by side Ngozumpa Glacier. Which is one of the world’s largest glaciers. As part of Gokyo trek. You will also climb Gokyo Ri (5483m) to watch the majestic peaks of Everest, Cho Oyu, Lhotse and Makalu.

Gokyo Trekking begins at Lukla and goes a longer route around Everest region passing through villages of Namche, Dole, Macchermo and Monjo. One of the attractions of this trek is the visit to Khumjung village where Hillary established the first school for Sherpa community.

The Gokyo Trekking gives you a glimpse of Sherpa lifestyle and their culture and Tibetan Buddhism. Gokyo Valley trek is equipped with good lodges and hotels and is suitable for trekkers who are physically and mentally fit.

We are also offering following packages in Everest region:

Jiri to Everest base camp trek